Most companies work on a traditional calendar year for their financial reporting and as a result, there are a cascade of events happening within organizations at the close of the year and in the first few months of the new year. For people in leadership roles there is most likely time set aside to meet one on one with direct reports to close out the prior year and kick off the new year with a set of performance objectives to support the over-arching goals of the organization.

Many times, these year-end review discussions also contain some definitive conclusions on total compensation adjustments where there may be a pay raise, bonus payment, or some other form of compensation and recognition.

For anyone who has participated in these discussions more than once, there can be the potential for a complete misalignment of performance and hence the potential for “shock & disbelief” on the part of the direct report and/or the leader. When it comes to specifics around pay increases and bonus payments, money always seems to add fuel to the fire of “shock & disbelief” on any specific misalignment on behaviors or activities. Even with traditional sales roles where tracking of performance has been weekly or monthly throughout the year, some underlying behavior expectations or activity measures have the potential for misalignment.

It is never a good day when a leader and a direct report are completely misaligned on key areas of performance. A complete misalignment may indicate some broader organizational issues that contributed to the misalignment, but for the most part, the burden falls on the leader to be more effective in their role to minimize the risk of “shock & disbelief” when discussing performance and compensation adjustments during year-end review discussions.

Here are a few common pitfalls that leaders can avoid in order to minimize the risk of “shock & disbelief” during year-end review discussions:

When the year does not begin clear on objectives and expectations, it will most likely only go downhill from the start. Leaders need to do the hard work of defining clear objectives, outlining examples of what specific behaviors look like, and reinforcing how these objectives tie to the broader objectives of the organization.

When leaders do not have a steady cadence or rhythm throughout the year to reconnect on performance, the stage is set for a misalignment at the end of the year. Leaders and direct reports need a consistent series of one on one discussions to review objectives and activities and behaviors that are the near-term drivers of performance. In addition, leaders need to address behaviors “in the moment” on an ongoing basis to provide reinforcement and a reconnection to the larger objectives.

It is not uncommon for leaders to shuffle along further than they should before addressing some underlying behavior issue or gap in performance of a direct report. The issue of underperformance is rarely cut and dry. Performance management is not routinely that easy. There is usually some really positive work going on combined with a behavior or activity where a direct report is falling short. A leader often hesitates in addressing the underperformance while providing over the top encouragement on the positive items in the hope that it will all come together in the end. Leaders should get in the habit of addressing all aspects of performance sooner rather than later to ensure alignment and necessary course corrections can occur throughout the year.

As leaders prepare to close out the year, they should be proactive about identifying and sharing learnings from any shortfalls with performance management in the prior year and be intentional about raising the bar on their effort and impact in the new year.

What if I were to ask you, “What is the most difficult leadership challenge you are facing today?” What would you say?

Here are a few resources to help: 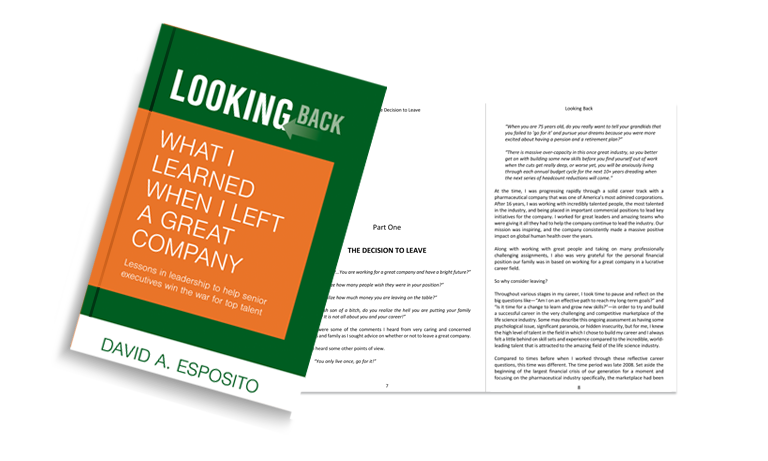 Over a decade ago, I left a great career with a multi-national life science company to learn and grow in the entrepreneurial side of the life science marketplace. Looking Back, captures the lessons I learned and provides senior executives with action steps to win the war for top talent to ensure their company succeeds in the long-term.